This recipe was one I took a chance on, and I’m so glad I did.  I’m not really a huge steak fan, but my husband is, so when I was looking for some new clean eating recipes to fit the new program I’m doing for the next three weeks, I knew this was one he would probably like.

I made the stuffed pepper version (which is the original recipe) for myself since I’m not eating any bread but Ezekiel Bread right now, and my boys both had theirs as sandwiches. The stuffed pepper piece is pretty easy to skip, and the filling was very simple. 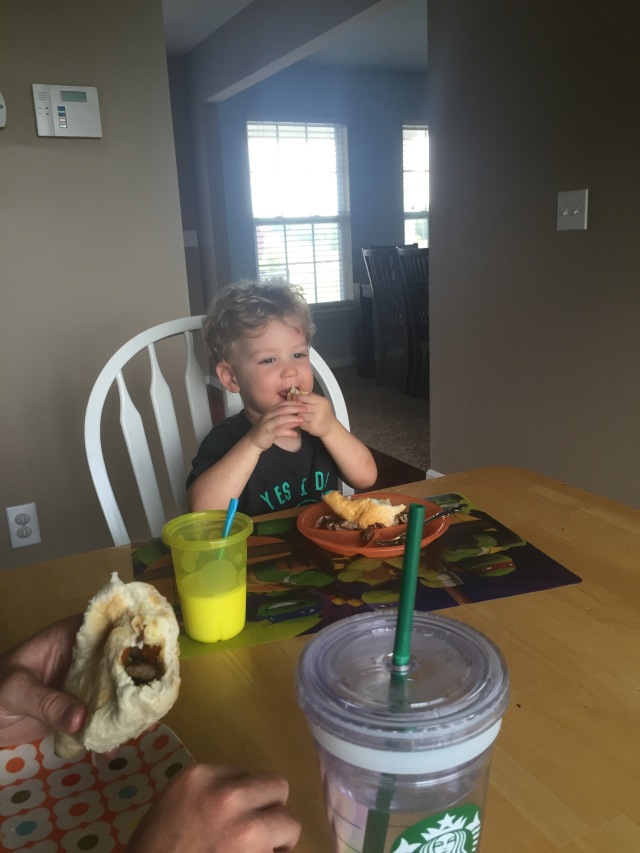 The orginal recipe calls for flank or flat iron steak, but we couldn’t find that at our grocery, so I had my husband pick out whatever kind he wanted.  I was still able to slice it pretty thinly!  I also didn’t have a red pepper like the original calls for, so I used an orange pepper.  I personally don’t taste a difference between red and orange peppers,  but if you do, make sure you have a red one.

There were a couple of ingredients that I swapped/left out because they aren’t on my current eating plan.  I left out the Worcestershire sauce because it isn’t on my plan, and I used mozzarella cheeese instead of Provolone.  It was so tasty!  When I’m done with this three week plan, I’d like to make it again with the Worcestershire sauce to see how that changes the flavor.

If you don’t like stuffed peppers, you could eat this filling in a bowl, over a spinach salad, or on sprouted grain bread for the sandwich.

2 green peppers, sliced in half from top to bottom and seeds and ribs removed

Boil 3 cups of water in a large saucepan.  Place the green peppers in the water and boil for 3-5 minutes, until peppers are tender.  Remove from water and set aside.  If they are very wet, place face down on a paper towel to drain some water.

Meanwhile, heat the oil in a large skillet.  Cook the diced pepper, onion, mushrooms, and garlic until the peppers are soft and the onions are translucent.  Add the salt and the pepper.  Add the steak and cook until steak is cooked to desired doneness, stirring frequently to prevent sticking.

Spoon the filling into the pepper halves to overflowing.  Top evenly with cheese.  Bake in the preheated oven for 10 minutes, until cheese is browning and bubbling.  Serve warm! 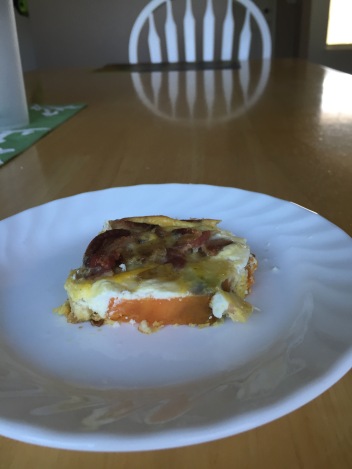 You guys.  Go out right now and get the ingredients for this egg bake.  I’m not kidding–it is so delicious!  It’s got complex carbs from sweet potato, salty goodness from bacon, creaminess from goat cheese–my mouth is watering just thinking about it!

I found this recipe on Pinterest, of course, and tweaked it just a bit to halve the recipe and to account for the fact that I hate turkey bacon.  I know it’s better for you and everything, but it just makes me sad.  Give me real, thick cut bacon any day of the week!  I just use a little less than the recipe calls for to cut the fat a little bit.

2 tbsp unsweetened almond milk (or whatever milk you drink)

salt and pepper to taste

Preheat oven to 375.  Grease an 8×8 baking dish with cooking spray or oil.

Fill a saucepan or small pot with at least 3 cups water and bring to a boil.  Add sweet potato slices and boil for 8-10 minutes, until slices are tender and soft (test carefully with a fork). Drain and set aside.

Meanwhile, heat oil in a medium skillet over medium heat.  Add onion, bacon, and garlic and cook, stirring frequently, for 7-10 minutes, until bacon is fully cooked and onion is soft and translucent.

Layer cooked sweet potato slices in baking dish, covering as much of the dish as possible.  Top with cooked onion/bacon/garlic mixture.

In a medium bowl, combine eggs, milk, and salt/pepper.  Mix well with a whisk or fork.  Add the goat cheese and stir carefully, breaking the cheese up into clumps.  Pour the egg/cheese mixture over the onion mixture.

Bake in preheated oven for 25-30 minutes, until lightly browned and bubbly.  Test doneness with a toothpick or knife inserted into the middle of the egg bake to make sure the egg is cooked through.  Let cool slightly before slicing.

Can be frozen in individual servings by cooling completely, wrapping each serving in plastic wrap, and keeping in an airtight container or freezer bag.  Keeps well in fridge for up to 5 days.

Last night I hosted a live meal planning video call!  I shared some tips and tricks that I use when I meal plan, and I actually planned out my meals for next week.  Next week is a little abnormal for my family because we have some out of town events, so there aren’t as many meals as normal.  I’ve made a special Pinterest board specifically for this call/meal plan, so none of the actual recipes are linked here.  Just follow the link at the bottom/scroll down for the recording to find my Pinterest board with all the recipes!

I also chose a lunch option for next week–Easy Quinoa Pizza Bowls–and a breakfast casserole.  Actually, I have two breakfast options because I can’t decide between the Easiest Breakfast Casserole Ever and the Sweet Potato Bacon Goat Cheese Egg Bake.  Yum!

For fitness, I’m kind of in between plans right now so I’m doing an array of different workouts.  I’m incorporating some running back into my routine which I LOVE, so my home workouts are focusing a lot more on weights, core work, and stretching.

Link to the Pinterest board with the recording and all recipes from the live meal planning session HERE.